Miscellaneous Information About Our World of Nature

Yes, We Have Lizards and Snakes

By Lynn Stafford, Liz Buchroeder and Bill Buchroeder
Photos by Bill Buchroeder, Randy Cushman, Edie Stafford, Lynn Stafford and Roger Stafford
Some folks find it hard to fall in love with reptiles. They are covered with scales; they either crawl or slither; some look like creatures from a horror film; and a few are even poisonous. However, reptiles are quite special. I am going to start by introducing two fancy scientific terms. Homeothermic: having a relatively stable body temperature independent of the outside temperature. This term describes all birds and mammals, including humans. Poikilothermic: having a body temperature that is either equal to or warmer than the outside temperature. This term describes reptiles and many other animals. So, when it gets cold outside, they get cold inside.
Therefore, reptiles are different in their physiology from birds and mammals. This causes them to behave differently. They tend to be seasonal in temperate zones. In our region, they shut down and enter torpid states during the cold months. Some also avoid the hottest periods of the year. Most reptiles are carnivorous. And they tend to need less food than comparably sized birds and mammals. If one is interested in looking for reptiles in our area, Spring is a good time to begin. Warm rocks along a trail, warm soil and warm pavement are excellent places to start searching. Also, the sunny sides of buildings are good for certain lizards. Depending on their size and structure, reptiles are looking for insects and other invertebrates or for small mammals. Bird eggs are not off-limit for some arboreal snakes. 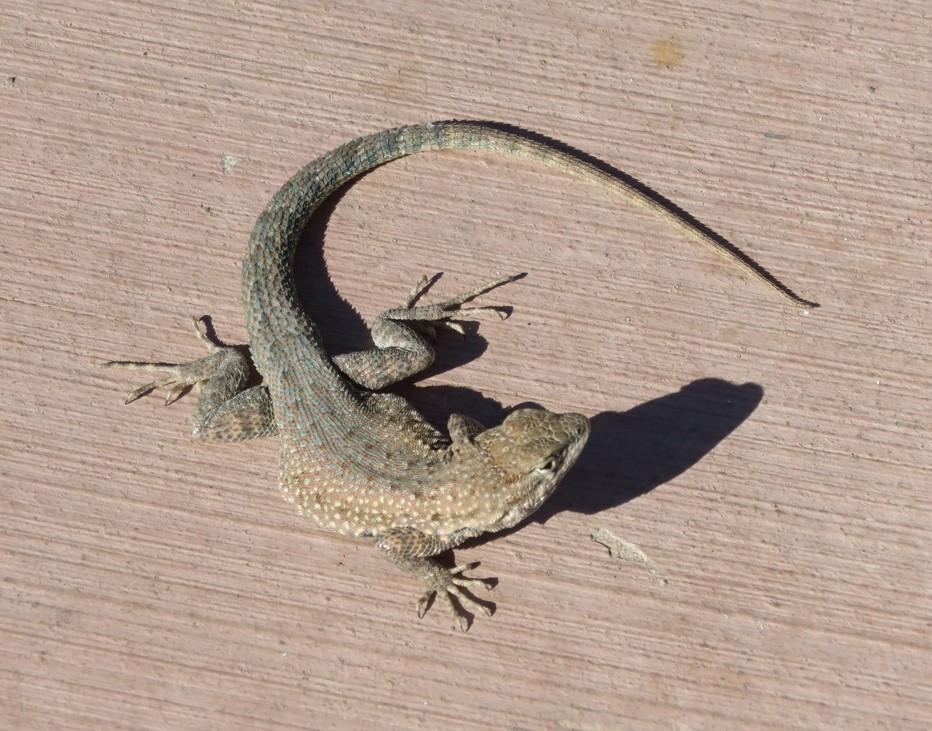 Fig. 1, Female western fence lizard
Here in PMC, we have a modest variety of lizards. I will discuss five of them. Because of our climate, they are strictly seasonal. In the spring, we can begin to see western fence lizards in our gardens, on our wooden fences or even on the sides of our homes. Fig. 1 is a female; males have bright blue underparts, hence the alternate name, blue-bellied lizard. If you see a ‘blue-belly’ doing push-ups, he is either warning off other males or trying to attract a female with his bright colors (is this comparable to showing off one’s biceps?). In some of our drier areas lives a modestly attired lizard called the side-blotched lizard. It looks somewhat like a female fence lizard but has a little dark spot above the front legs (Fig. 2). Then there is the alligator lizard (Fig. 3). It is quite large and fast-moving. It often can be found in gardens. 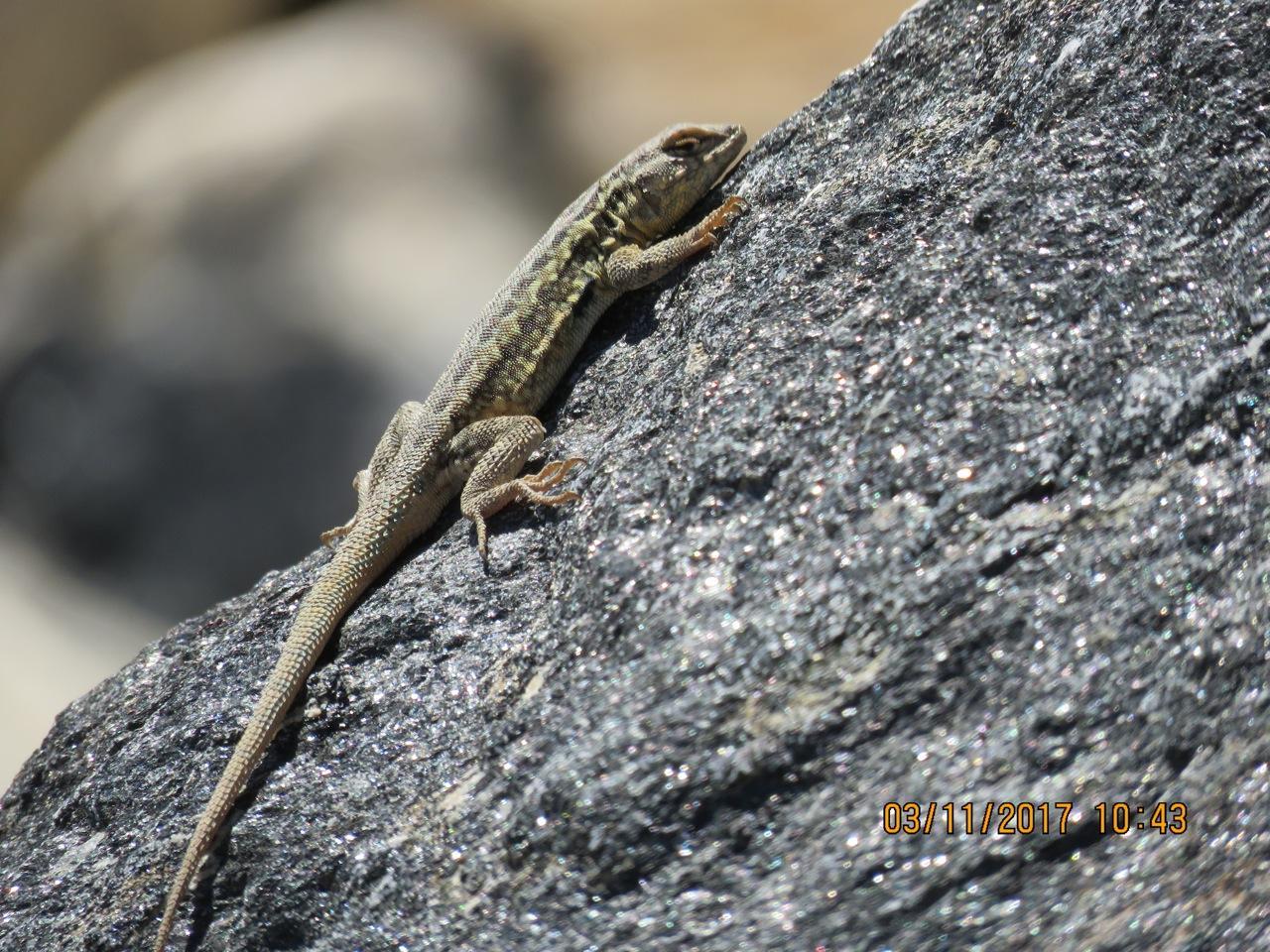 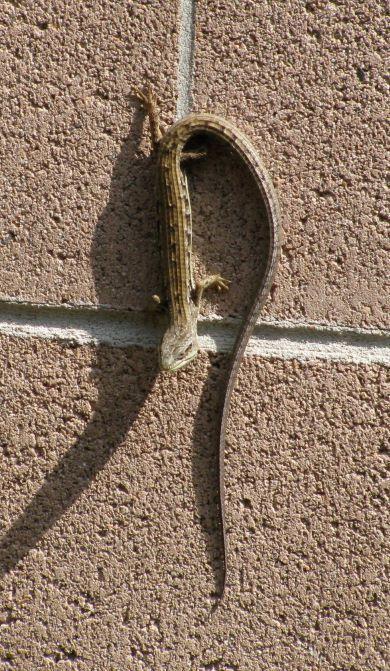 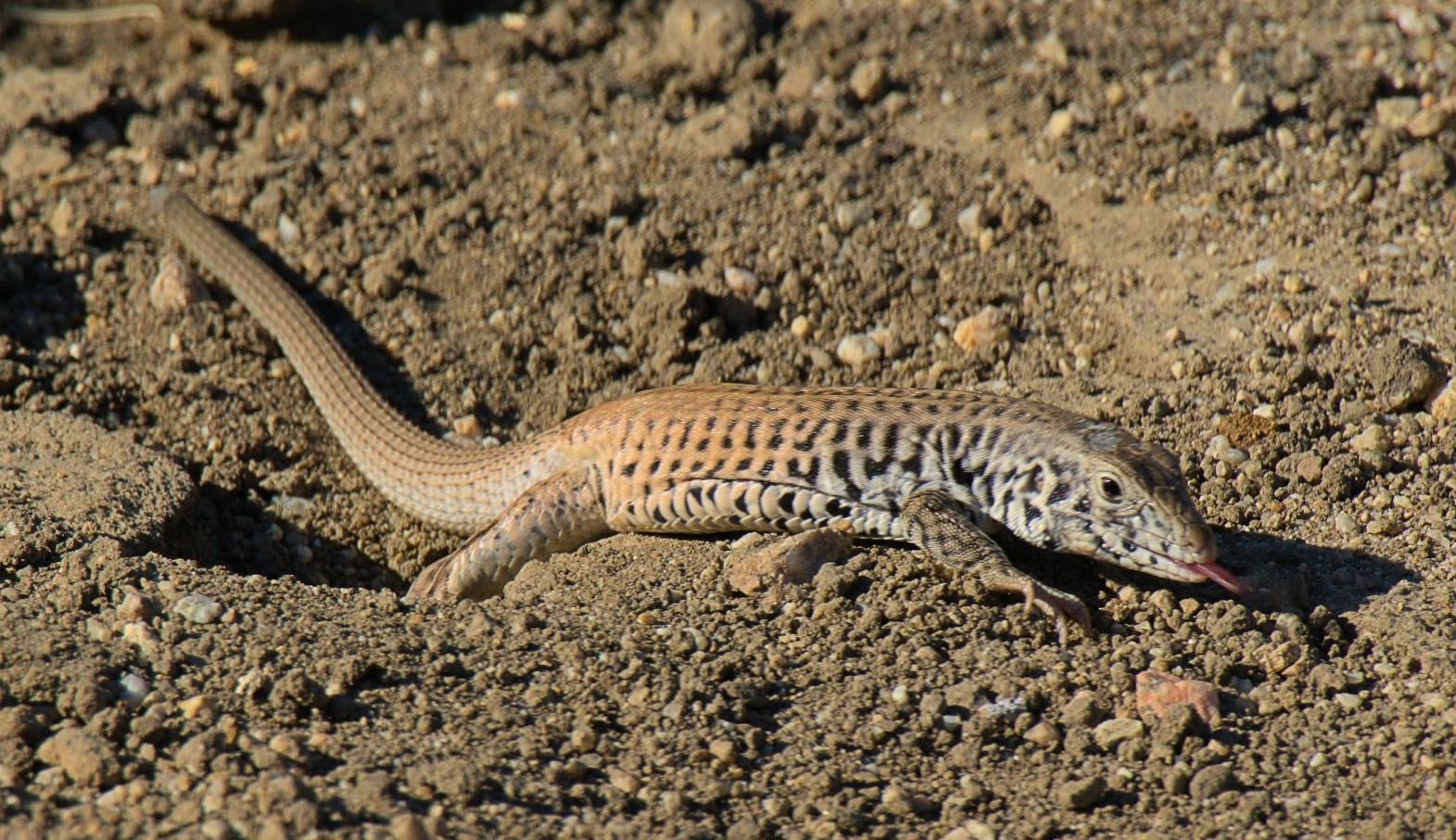 Fig. 4: Western whiptail
On to the legless wonders, the snakes. Fear of snakes is very common among people. Even with my decades of experience with snakes in the field, I can be startled by the sight of a weaving hose. It is an involuntary, probably instinctive, reaction. However our emotions may feel about it, snakes are an integral part of our natural world. I will discuss three species; several others are possible in our area. Snakes have evolved to use body movement instead of leg movement to propel themselves. Some lizards, such as the alligator lizard, use a combination of these techniques. 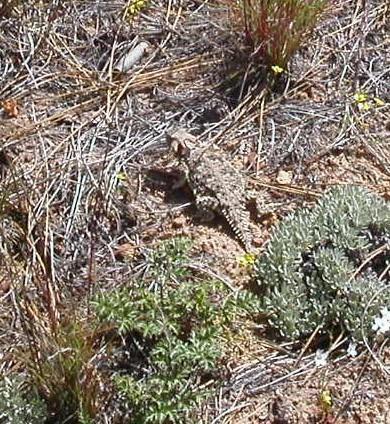 Fig. 5: Coastal horned lizard
If one is driving up or down Hudson Ranch Road west of PMC, it is wise to drive slowly to avoid running over a snake. Two that are common out there are the gopher snake and the Pacific Rattlesnake. They like the warm pavement, and often cross the road slowly. These two snakes look somewhat alike. They are quite large and have similar diamond-patterned backs. However, rattlesnakes tend to be chunkier in body and somewhat darker. They have triangular heads (Fig. 6), and of course, rattles at the 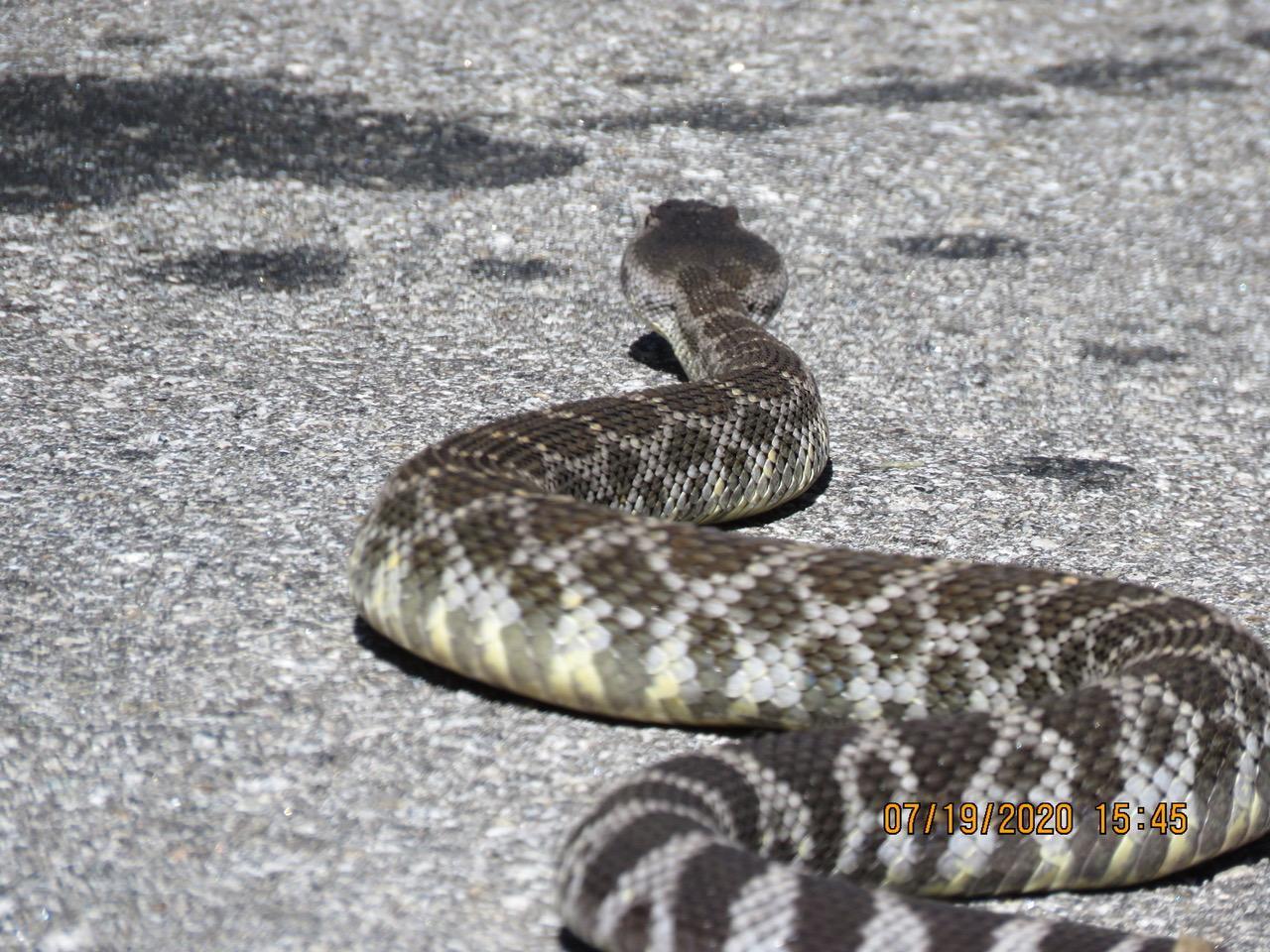 Fig. 6: Pacific rattlesnake-showing triangular head
end of the tail (Fig 7). Gopher snakes have heads that slope forward from the body, and have no rattles (Fig. 8). Rattle snakes have no desire to hurt humans or dogs. They simply don’t want to be stepped on. Their poisonous bite has registered in the collective intelligence of large prairie mammals, such as bison, over many generations of evolutionary change. The rattle is a warning. Nonetheless, it is important to be alert when outside during the warm seasons. My rule is to never take a step without looking first. That includes stepping over logs. Never pick up a flat object like a piece of plywood so that the opening faces you. And, of course, dog owners have to use special precautions. Many dogs do not have a sense of rattlesnake presence. My dog once walked over a dead rattlesnake without being aware; and she was walking straight at an agitated rattler when I called her on another occasion. 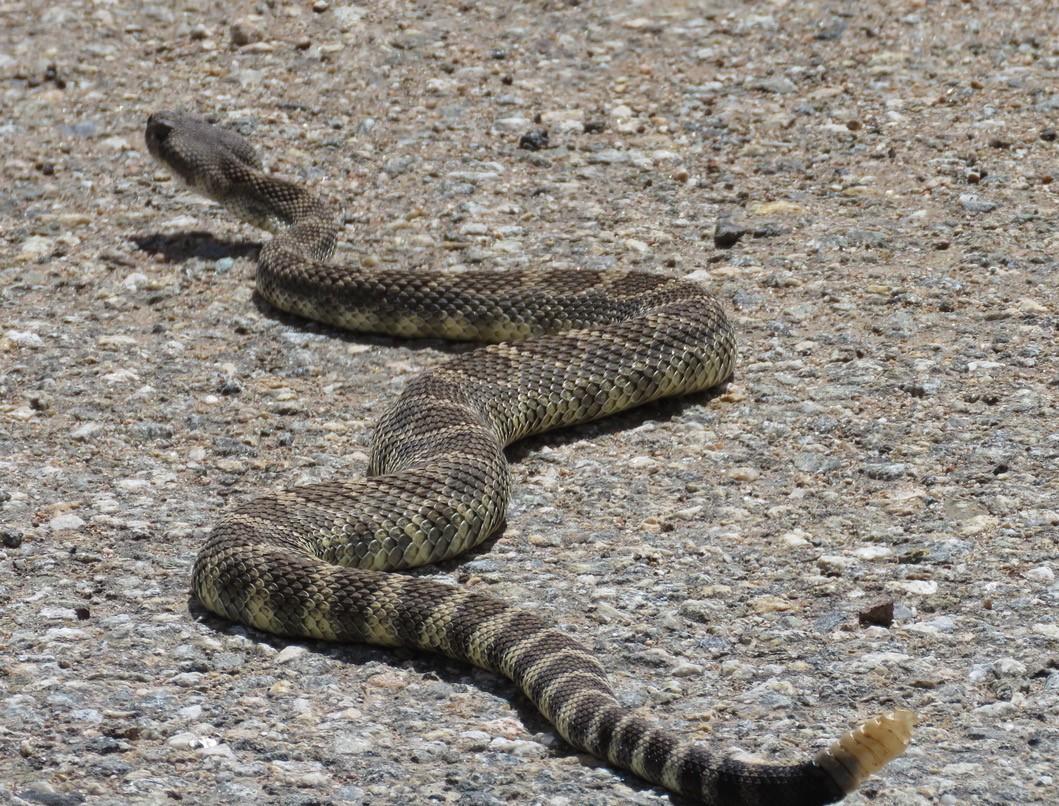 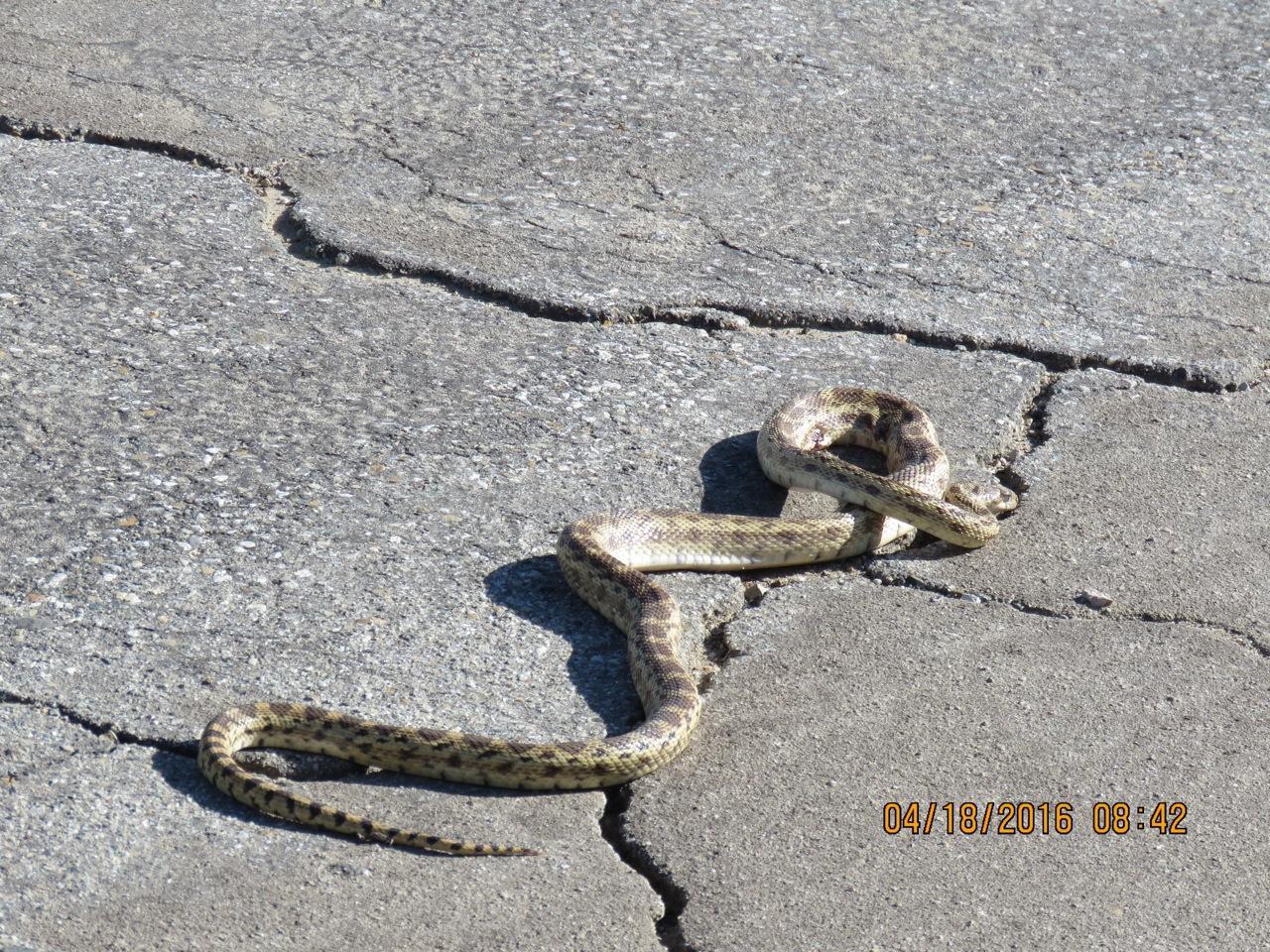 Fig. 8: Gopher snake
Another snake found locally is the two-lined garter snake (Fig. 9). It has linear stripes along its body, rather than rectangular patches, like the two snakes previously mentioned. It prefers water and wet habitats near water. 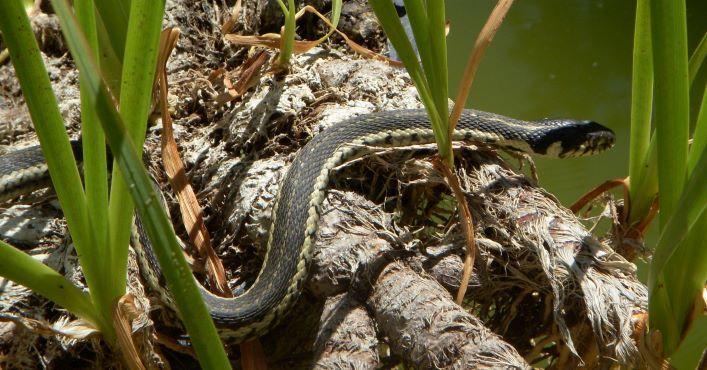 Fig. 9: Two-lined garter snake
There are several other snake species possible in our area, including the king snake, ring-necked snake, racers, whipsnakes and others. Please try to avoid running over, or killing, any snake, when possible. 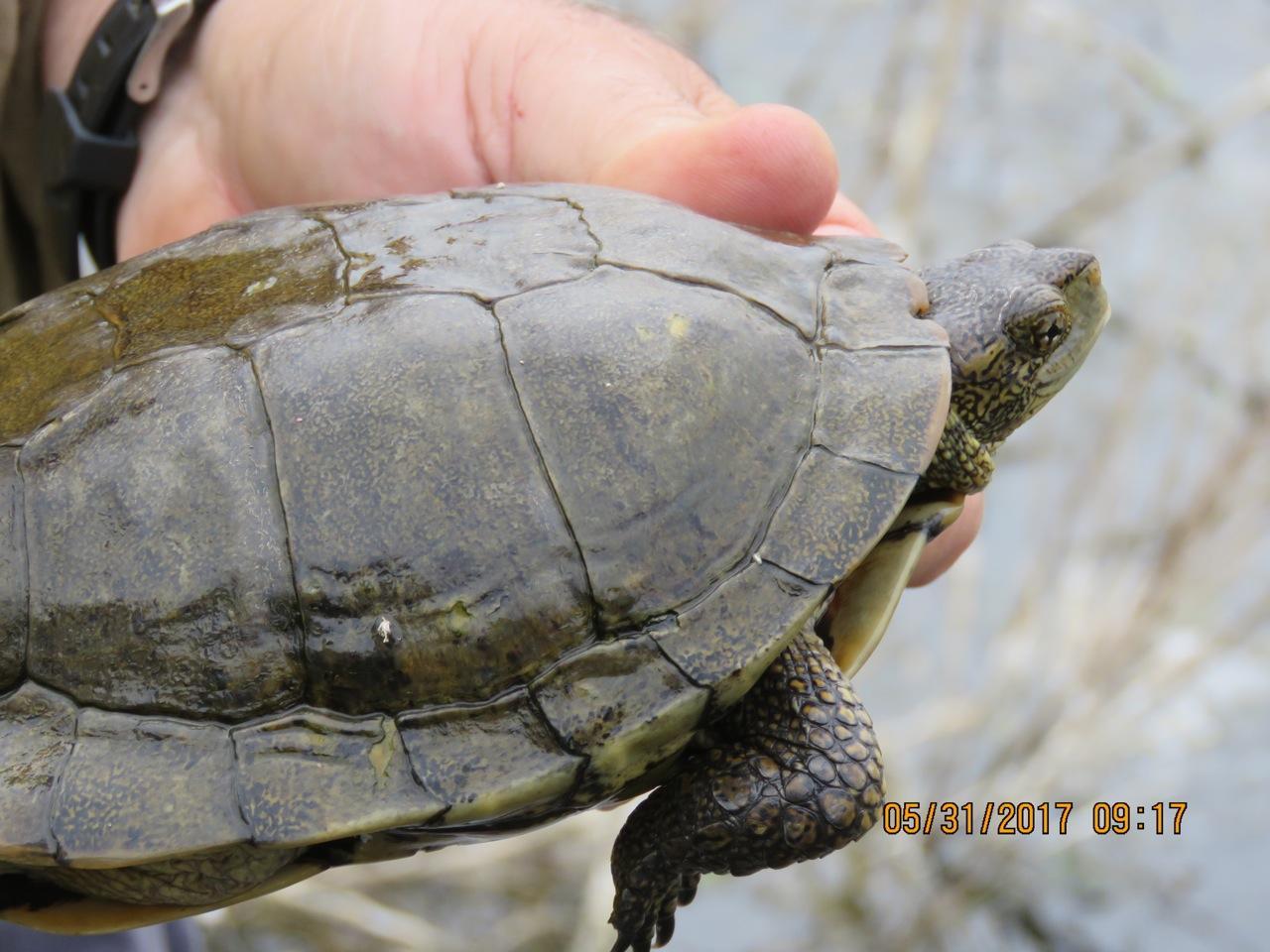 Fig. 10: Western pond turtle--marked and studied by population researcher
Lizards and snakes are important natural predators and should be treated with respect. Some of the larger snakes help keep the rodent population in balance. I am going to mention one other reptile that is not found in PMC, but is a very special animal because of its rarity. This is the western pond turtle. The nearest population to us is in a seismic sag pond on Gorman Post Road, southeast of Gorman. This population is being studied by a California State University at Bakersfield biology professor (Fig. 10). Also, our local nature photographer, Bill Buchroeder, has been documenting its presence for the last five years (Fig. 11). This population of pond turtles lives in a pond that dries up each summer. The turtles simply burrow into the mud and remain inactive until the next filling. Any turtles found in local ponds, such as Fern’s Lake, are introduced, non-native species that have been carelessly discarded as unwanted pets. Of course, no pets should be discarded.

By Lynn Stafford, Liz Buchroeder and Bill Buchroeder
Photos by Bill Buchroeder, Liz Buchroeder and Mary McDevitt
One pleasant sign of summer in our mountain community is the presence of butterflies in our gardens and along trails. This article will discuss six of our local species. Butterflies have amazingly complicated and varied lives. All butterflies pass through four distinct stages of life, often within just a few weeks. First are the eggs. These eggs have been placed on a plant that the emerging caterpillar will eat. The caterpillar is an eating machine! After reaching a certain size, the caterpillar changes into a stationary stage called the pupa or chrysalis. I did not refer to this period as a resting stage. That is because the animal is busy transforming into a completely different form -- the showy and able-to-fly adult butterfly.
Two of our butterflies have rather small distribution ranges. The California Sister (Fig. 1) is 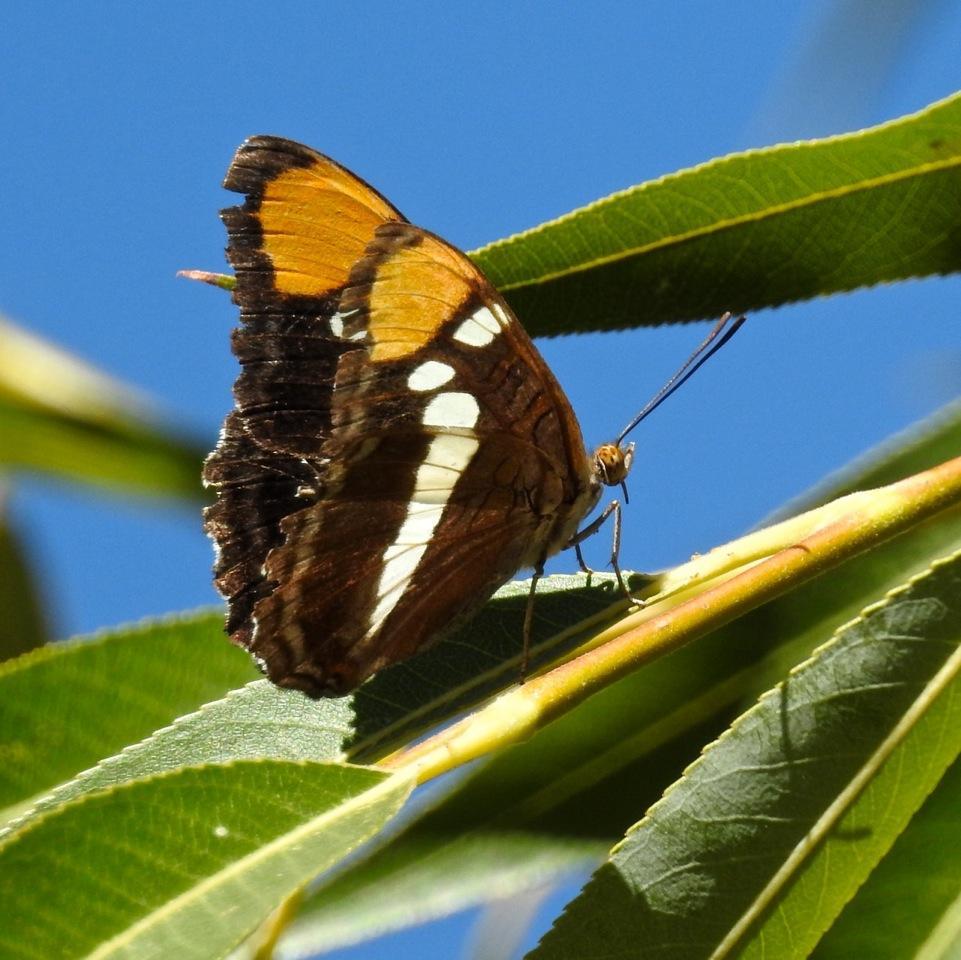 California Sister
indeed mostly restricted to California. It loves oak trees, particularly the canyon live oak, a common tree native to PMC. Both the caterpillar and the adult get most of what they need from these trees. Adults often can be seen drinking from mud puddles and streams. They are getting nutrients, including minerals, as well as water. California Sisters will cycle through one to three generations each year.
Another limited-range butterfly is the dramatic Western Tiger Swallowtail. As its name implies, it is found throughout western United States. Both the caterpillars and the adults 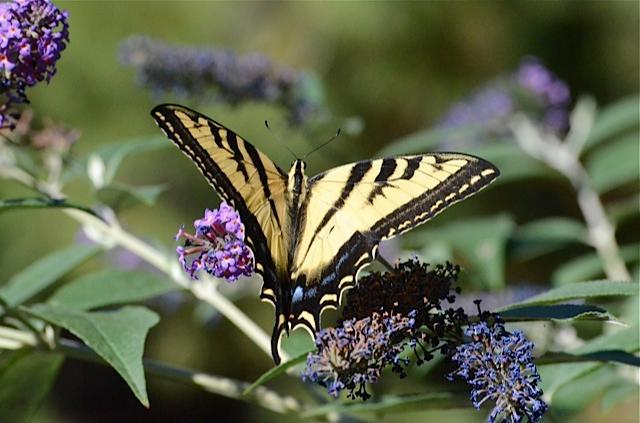 Western Tiger Swallowtail
feed on a wide variety of plants. The pupa overwinter. As shown in (Fig. 2), the adults enjoy planted Buddleia bushes. This one was in Mary McDevitt’s garden in PMC. 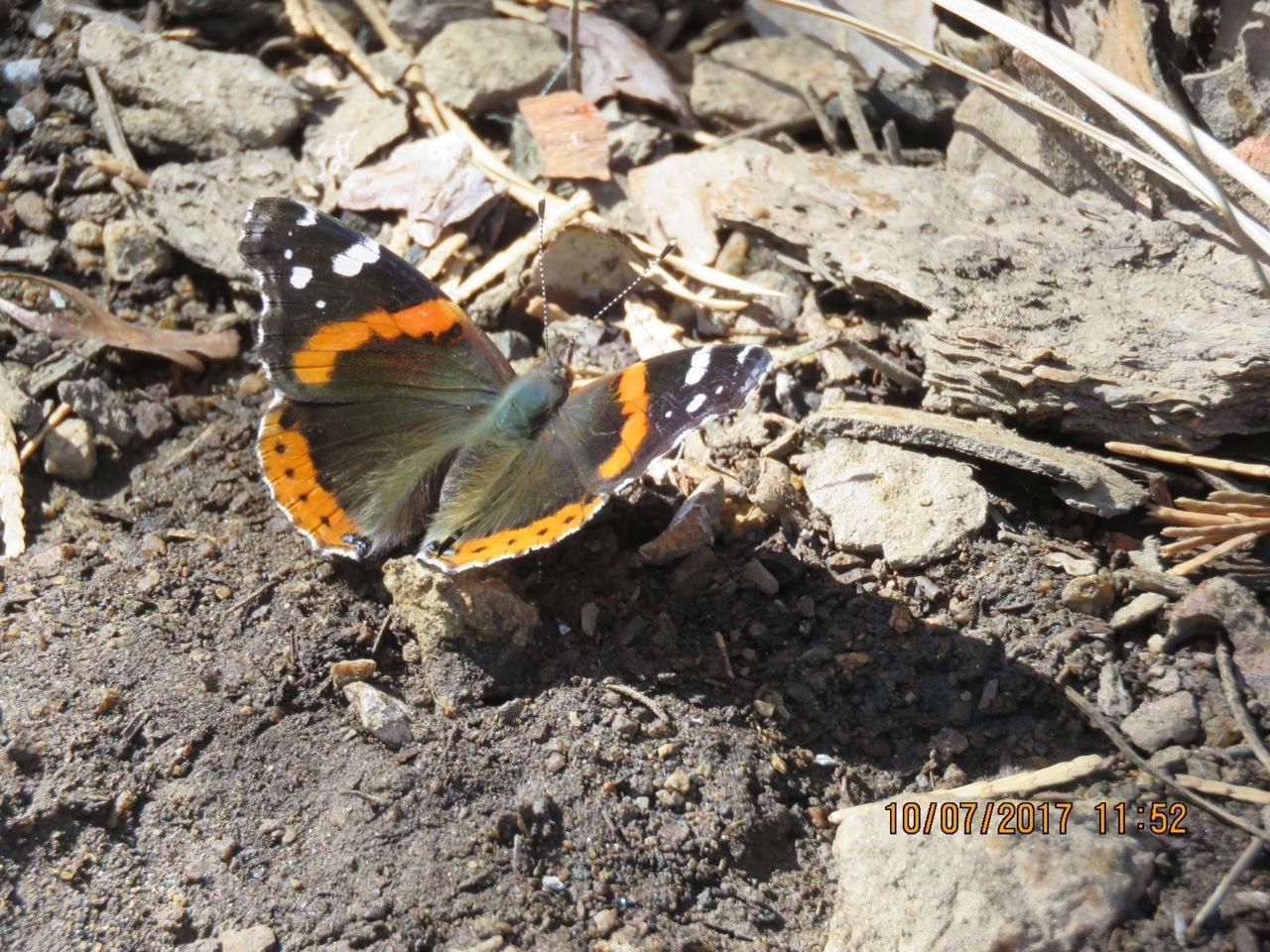 Red Admiral
Next, we will look at two butterflies with wide distributions, including annual migrations. The Red Admiral (Fig. 3) is a striking butterfly with bright red or orange bands on its wings. It is found throughout much of the world, but only where stinging nettle is present. The eggs are placed on stinging nettle leaves, and that is all the caterpillar will eat. People frequently do not appreciate stinging nettle because of its irritating leaf hairs, but this butterfly certainly does. PMC’s wetlands are loaded with stinging nettle, so we are blessed with this species. Red Admiral males are quite territorial, defending their patch of nettle. Adults tend to migrate south in the winter. Migration dates are timed to correspond to food sources.
The Variegated Fritillary (Fig. 4) also is a migrating butterfly, being found in both North and 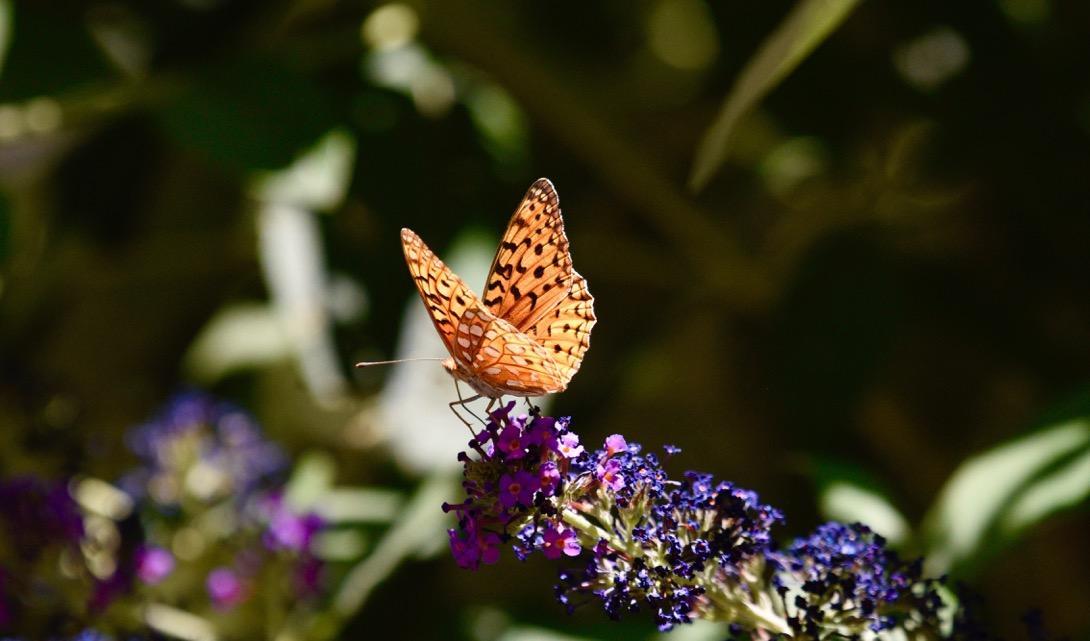 Variegated Fritillary
South America. Different populations have different migration routes and schedules. Unlike the Red Admiral, both the caterpillars and the adults forage on a wide variety of plants. The caterpillars focus on leaves; the adults look for flower nectar.
Finally, we will discuss two species with amazingly complicated lifestyles. Both are multi-generational migrants. The Painted Lady (Fig.5) is found throughout much of the world. 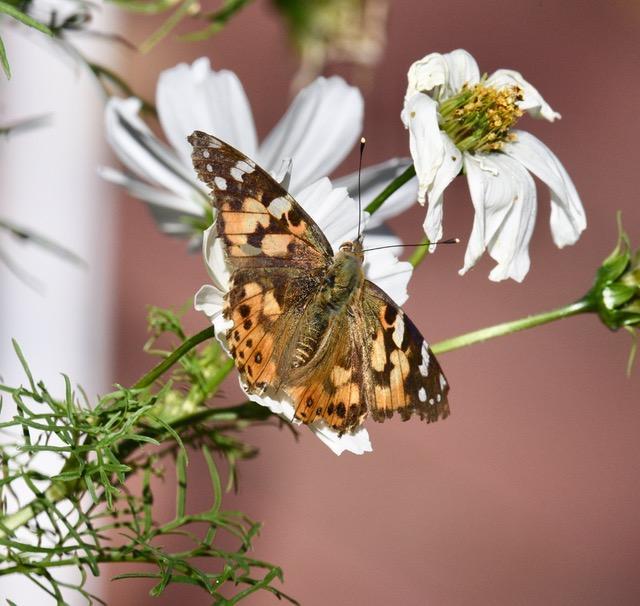 Painted Lady
Painted Ladies studied in Africa and Europe were found to undergo migration between the continents that took several generations. In other words, no individual completed a migration, but the species migrated back-and-forth. Mind-boggling! The caterpillars enjoy a variety of thistles and mallows. The adults seek nectar from the flowers of members of the sunflower family, including thistles. 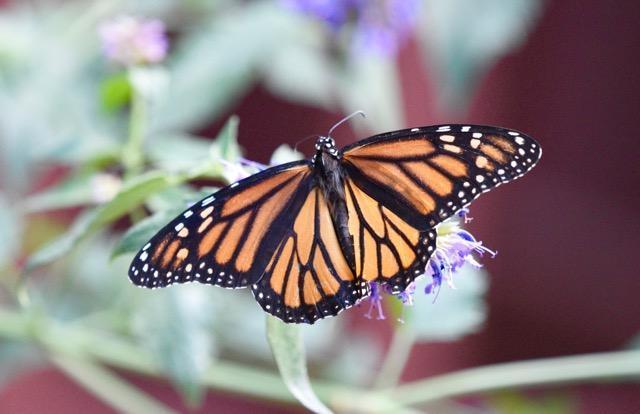 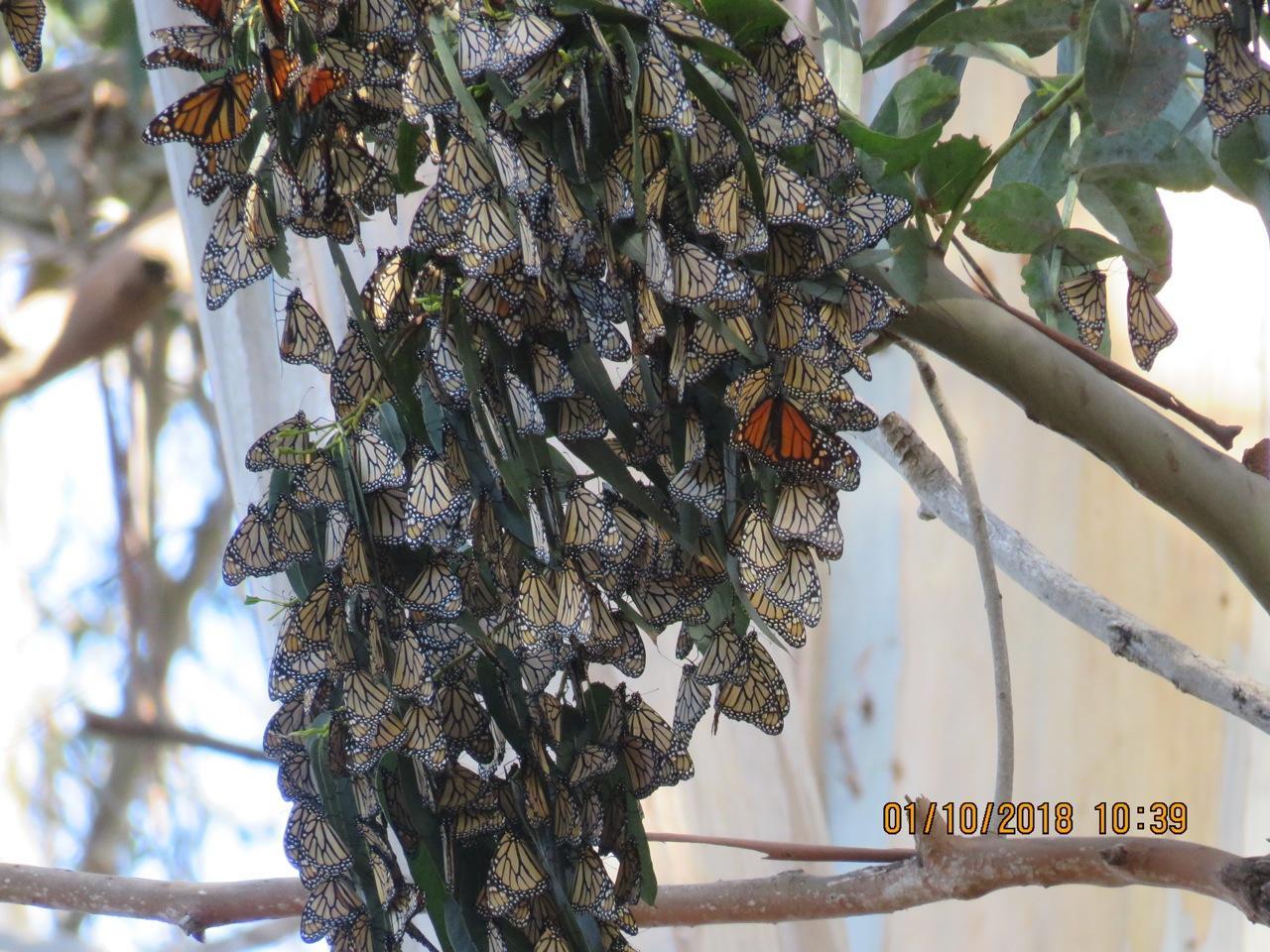 A wintering swarm of adult monarchs on a tree near the coast
Then we have the Monarch (Fig. 6). The Monarch is well-known, both because of its tourist-attracting massive winter flocks (Fig. 7) and because it is rapidly declining in numbers throughout its range. The Monarch has complicated migration patterns. The eastern U.S. population tend to winter in Mexico, particularly the state of Michoacan. In the west, the adults fly to several locations along the California coast. In each of the two migrations, the butterflies return to the same groves of trees. The caterpillars (Fig. 8) require leaves of 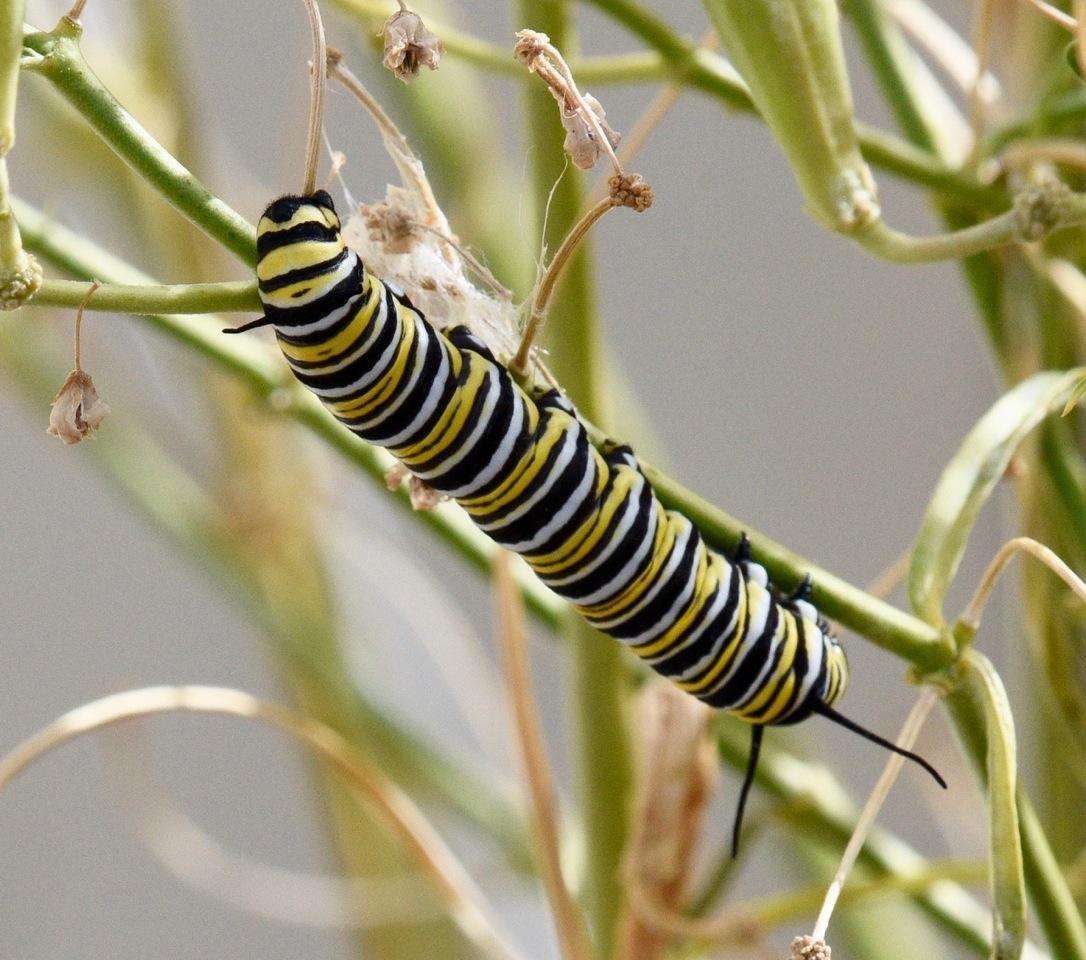 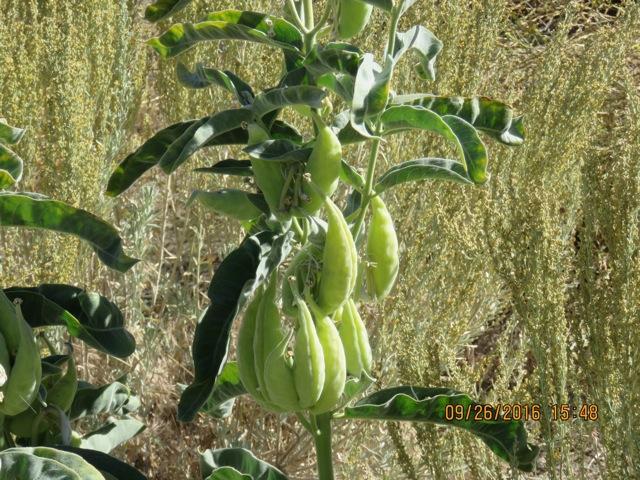 Broad-leaf Milkweed with seed pods ready to burst
having milkweed present in one’s garden, seeds can be collected locally in the Autumn from wild plants that are adapted to our unique area. (Fig. 10) shows local resident Liz Buchroeder doing exactly that. 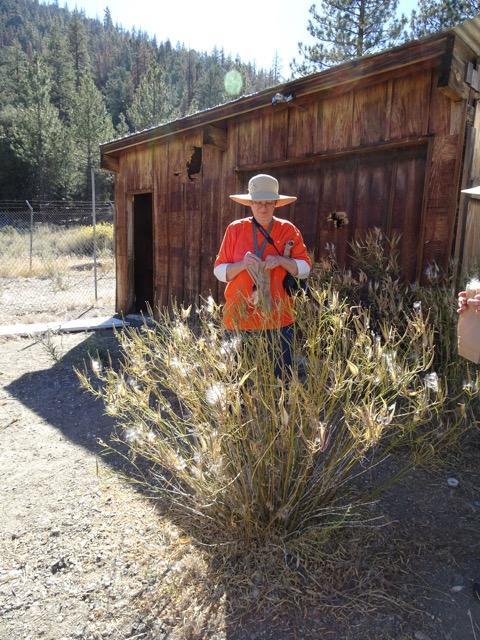 Collecting seeds from a Narrow-leaf Milkweed near PMC
A major mystery is the dangerous decline in insect populations throughout the world. This decline is being studied carefully by entomologists and ecologists, and is thought to be caused by modern human activity. In the case of the Monarch, several theories are being raised. Extensive use of herbicides is a likely candidate. Most of the corn and soy now being grown in the Midwest has been genetically modified to withstand massive amounts of herbicide. Besides contaminating the food, this practice eliminates other plants, such as milkweed. Human-related climate change and other alterations of land cover also are being studied as possible causes. Insects are by far the most abundant animals on earth. The dismantling of their populations could have devastating worldwide consequences.
Here in PMC, we have a relatively healthy environment for all our wild animals and plants, as well as for us humans. As the summer unfolds, do get outside and enjoy! Take a camera; take a sketch pad, or just relax and take your time enjoying our colorful visitors on their journey thru PMC and its environs.