Animals of Our Mountain Community

Humans are primarily daytime creatures. In modern times, through the development of candles, lanterns and then electricity, we have moved daytime indoors, thus extending our daily activity periods. But still, we tend to turn off lights to sleep. Dark time is sleep time. Here in Dark Skies-aware PMC, there are no streetlights. Residential outdoor lights are few. Someone viewing our village from a nearby mountain ridge late at night would see a few bright points of light letting them know there was a human settlement. There would be little activity, few vehicle lights. This is one of the important differences between us and the cities below. 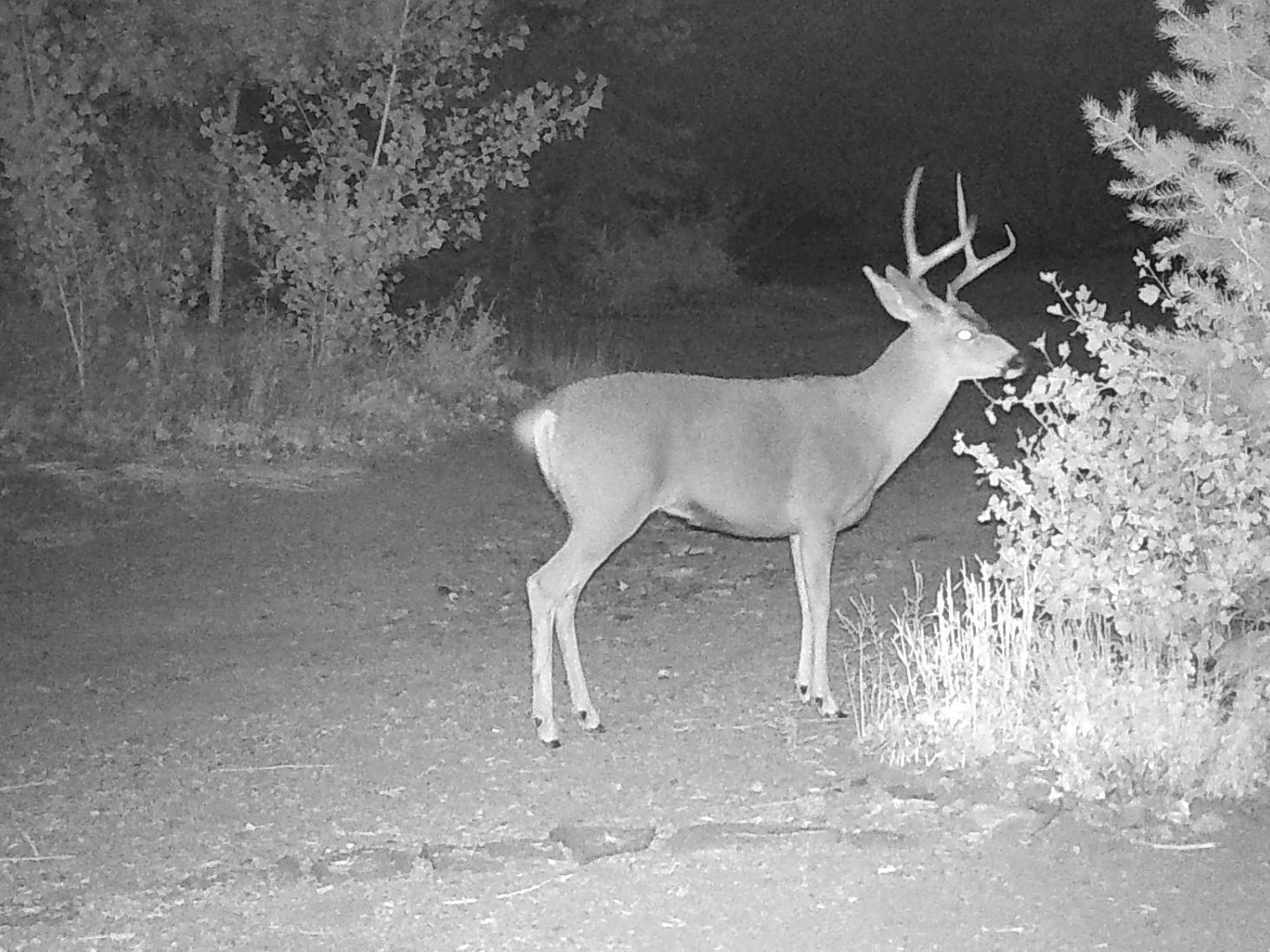 Buck
As we humans slumber or read late into the evening, a world comes alive outside in the woods, along trails, down creek beds and between houses. There are many wild animals that prefer dawn and dusk and even midnight to conduct their daily affairs. Owls, bats and moths are among the aerial denizens. Owls seek night-active rodents and other creatures. Bats are using sonar to locate and capture night-flying insects. Moths use scent and perception of white color to find night-blooming flowers. 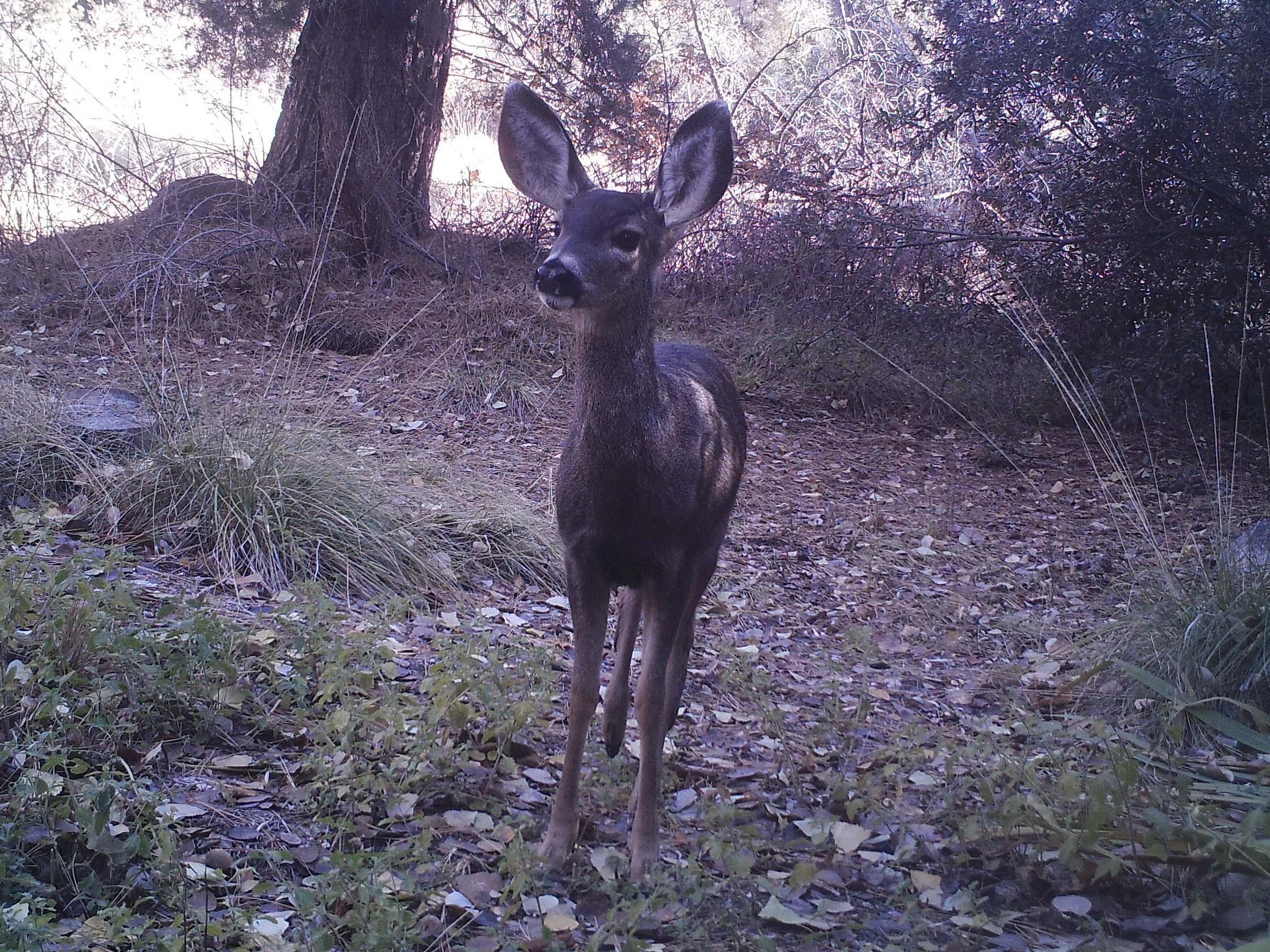 Fawn
On the ground, moving out of wood piles, coming up out of burrows, passing down from forest and brush dens come the night mammals. This article will focus on some of these elusive creatures that are right here in PMC. They were here before PMC was built in the early 1970s. They are natives; they don’t need people and most avoid people, although some have found people useful. White-footed mice and wood rats love to build nests in our structures. Bats often find daytime shelter in our buildings during the summer months when they are present. And, of course, deer enjoy some of our planted morsels. 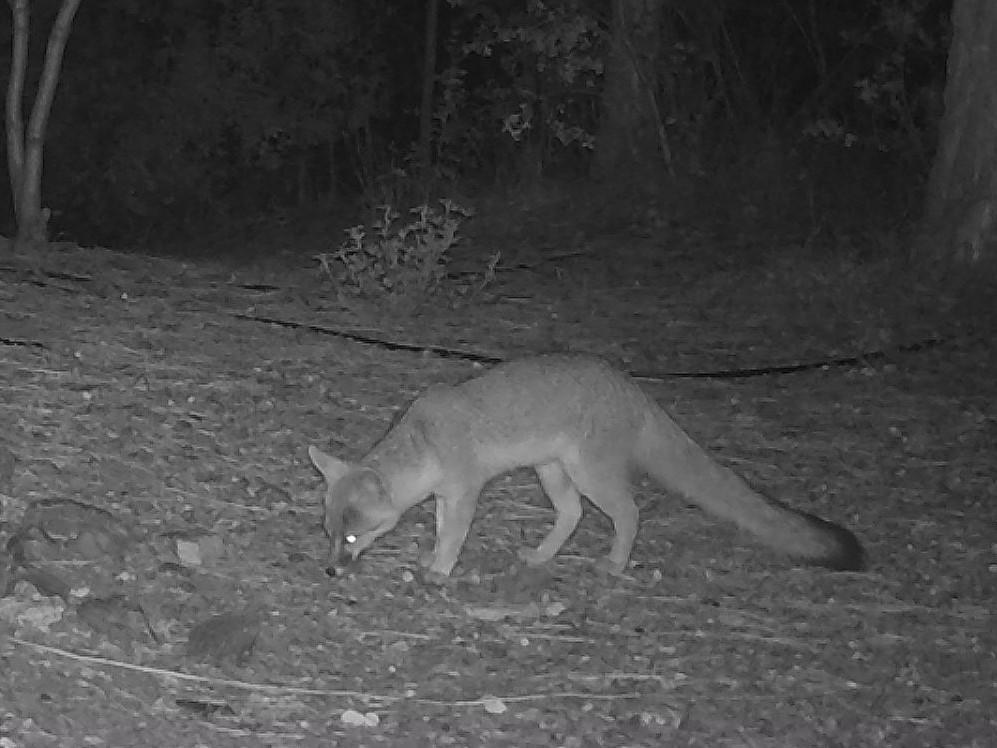 Gray Fox
Then, there are the bears! Bears, like humans, are omnivores. They will eat almost anything. Their sense of smell is outstanding. Some hand lotion left in a car; a sack of dog food on the deck; even a window left open so that the kitchen smells can pass through the screen will entice a hungry bear. And bears are always hungry. They store up fat for the lean times of winter. Unfortunately, some bears have been legally shot by authorities in PMC because they have become dangerous. But all that is due to carelessness on the part of us humans. 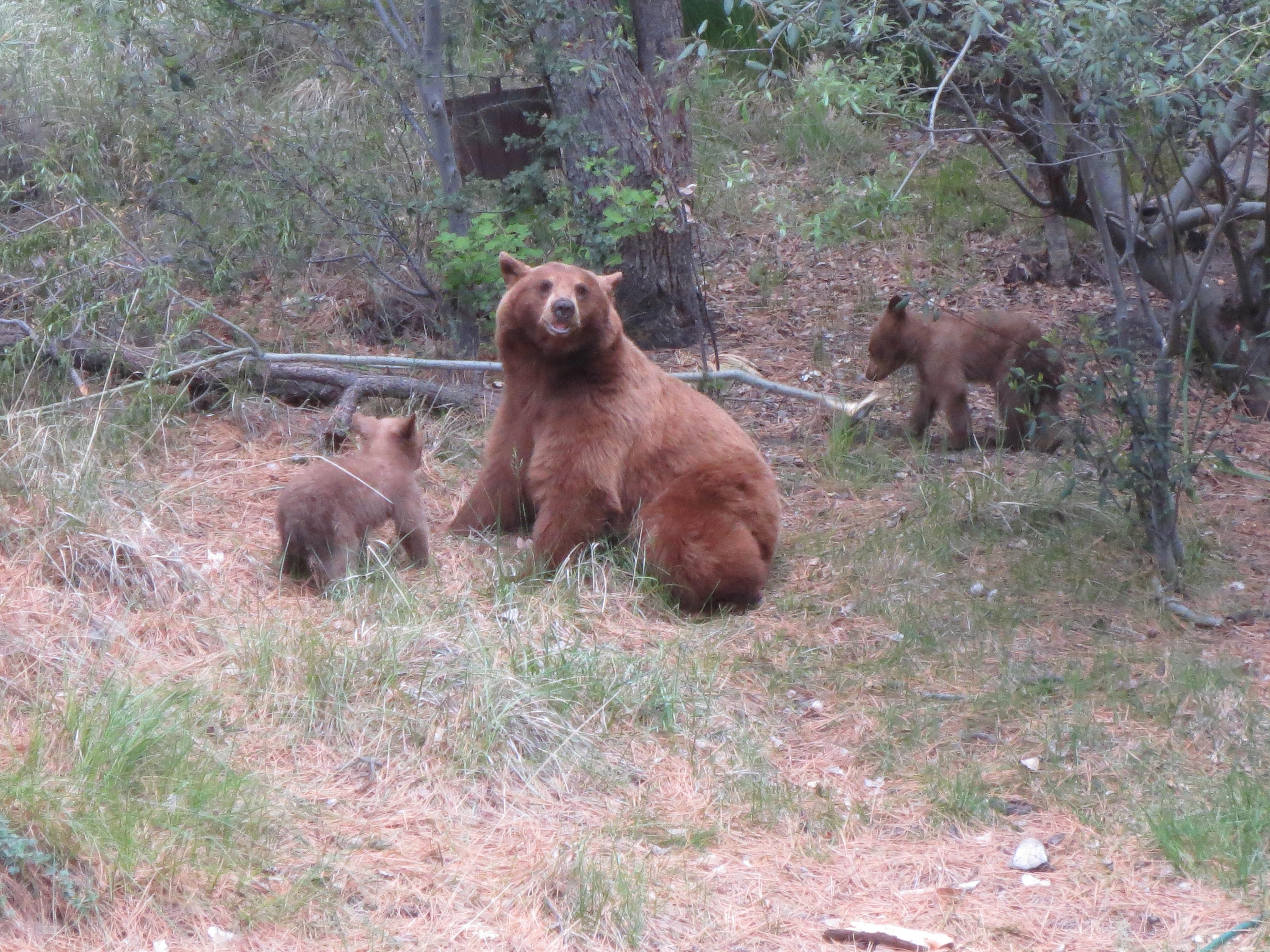 Mama Bear and Cubs
There are several enterprising photographers up here who place motion cameras out to capture the wildlife. Included are several photos taken right here in PMC; some in the daytime, some at night. One captured shot shows a sow bear guiding her two cubs on a food hunt. The older fawn deer has yet to grow into its ears. A buck in the fall knows there is safety from hunters in the greenbelts of PMC. A long-tailed gray fox uses its nose to search for small rodents. For stealth and secrecy, there are the cats. A bobcat is at high alert with short tail curled up, ears up and body poised. Finally, a secretive mountain lion passes silently between homes searching for the deer. 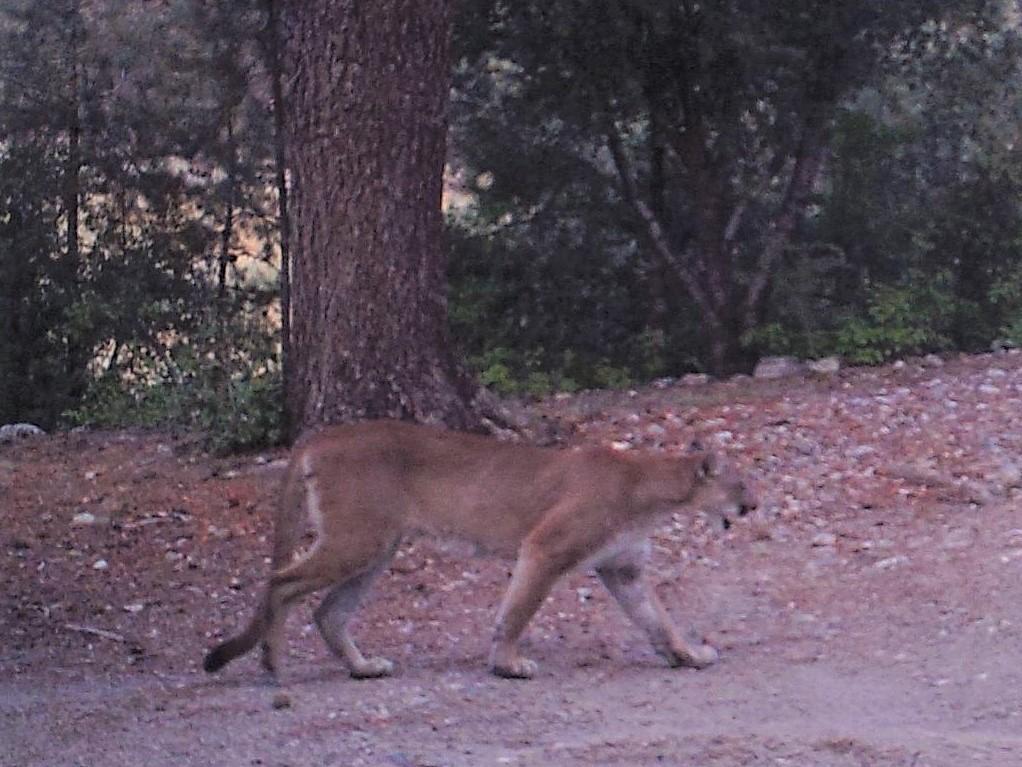 Mountain Lion
It is always important to remember that we humans are the newcomers here. Our mountain paradise has been home to the wild animals for thousands of years. Most of them are not adapted to deal with fast vehicles and bright headlights at night. Driving slowly and carefully is not only important for feeling the tranquility of our forests, but essential for the safety of the nightlife that is still trying to figure us out. 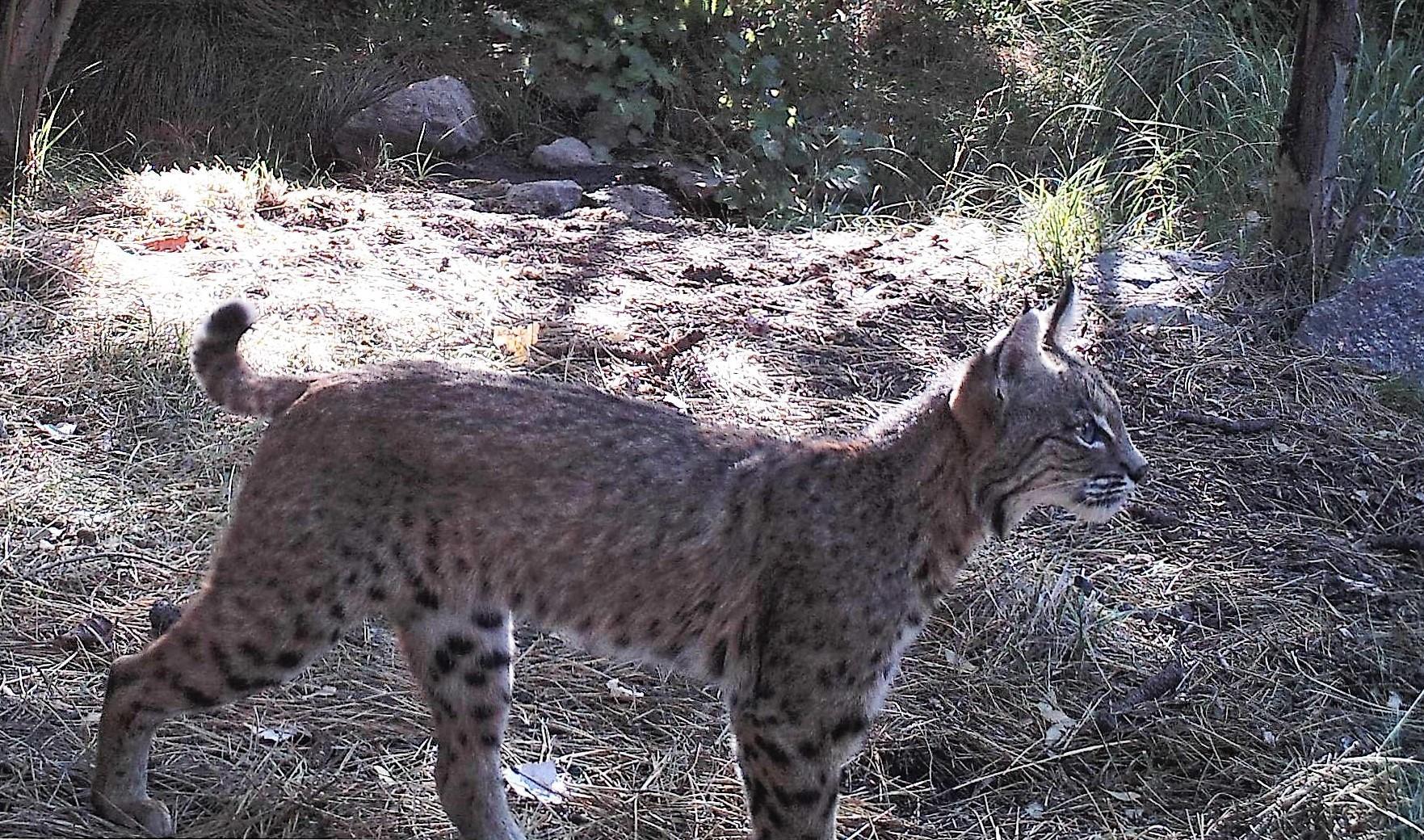 By Lynn Stafford with Liz & Bill Buchroeder
Photos by Liz and Bill Buchroeder
Our Fern’s Lake, off Edgewood Way in PMC, is special for many reasons. It serves as a water pick-up for helicopters involved in fighting local wildfires. It is a reservoir serving the golf course and the storage of water from the Woodland Creek diversion. It is a recreation park for residents and visitors. It offers catch-and-release fishing. In these challenging COVID times, it is a beautiful spot of nature where one can rejuvenate one’s spirit. A parking area with a porta-potty welcomes visitors between dawn and dusk. Signs help visitors to follow rules of etiquette and safety.

Fern’s Lake was created as part of the development of Pine Mountain Club. It is the lowest of three golf course ponds. It was built on part of the Mil Potreros Wetlands, which originally extended from the Clubhouse down to San Emigdio Canyon. The wetlands now start below Fern’s Lake. The lake is named for an early resident and next-door neighbor who volunteered to help maintain the quality of the water by periodically clearing out large quantities of algae.
The Lake attracts many wildlife creatures. Several mammals come down at night when people are gone to drink and prowl around. Various birds can be found on the lake and in surrounding vegetation. 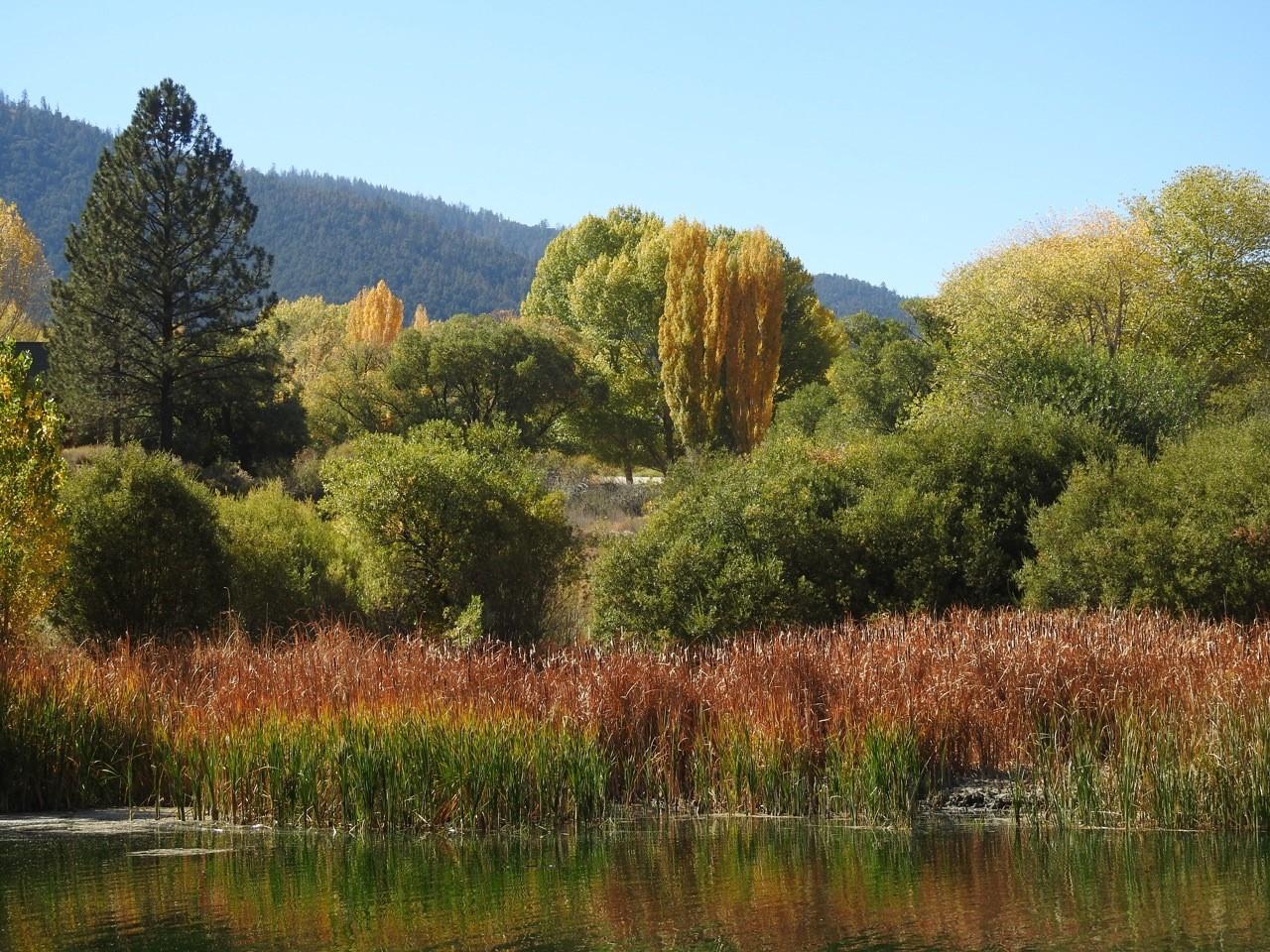 Fern's Lake
This article is about one very special winter duck visitor -- the ring-necked duck. This black and white diving duck nests in inland wetlands of the northern States and Canada. It then migrates south for the winter. For some reason unknown to us, a flock of 50 to 200 of these ducks have been wintering at Fern’s Lake each year from about October through March. There are very few locations in California where this many individuals of this species congregate in winter. I have no idea how ducks’ GPS systems work, but they seem to understand the location and quality of small ponds as well as some human travelers recognize the presence of their favorite fast-food outlet. 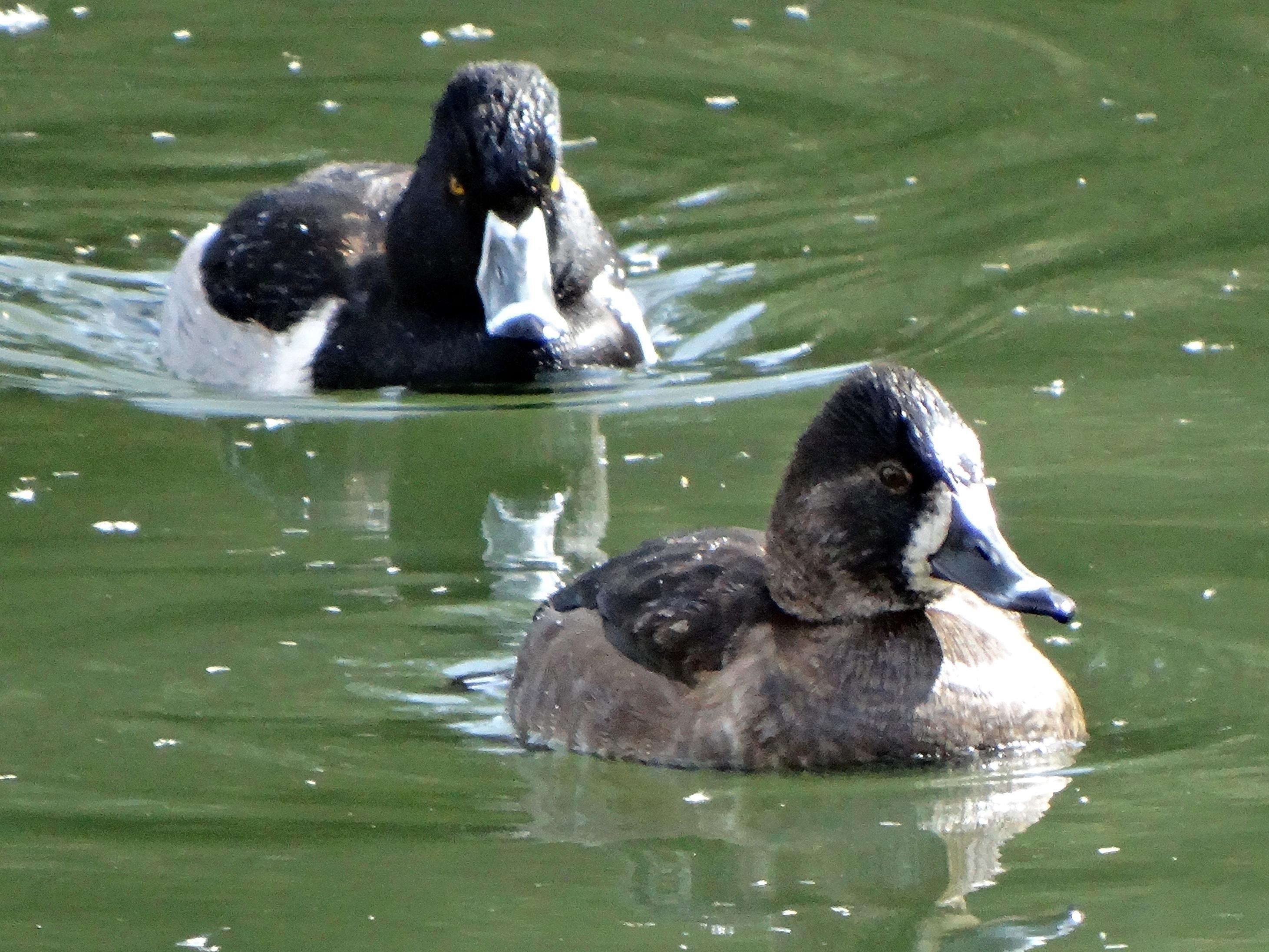 Coots
Two years ago, the lake was dredged and cleared of cattails to enhance the access of helicopters. We were concerned that this disruption of the ecosystem might discourage the ring-necked ducks. Last winter, we saw only a few visiting for short periods of time. However, they are BACK! Obviously, this pond is healthy for wildlife. Golf course maintenance minimizes pesticide applications. Already this winter, wildlife photographers Liz and Bill Buchroeder have documented at least 122 birds. 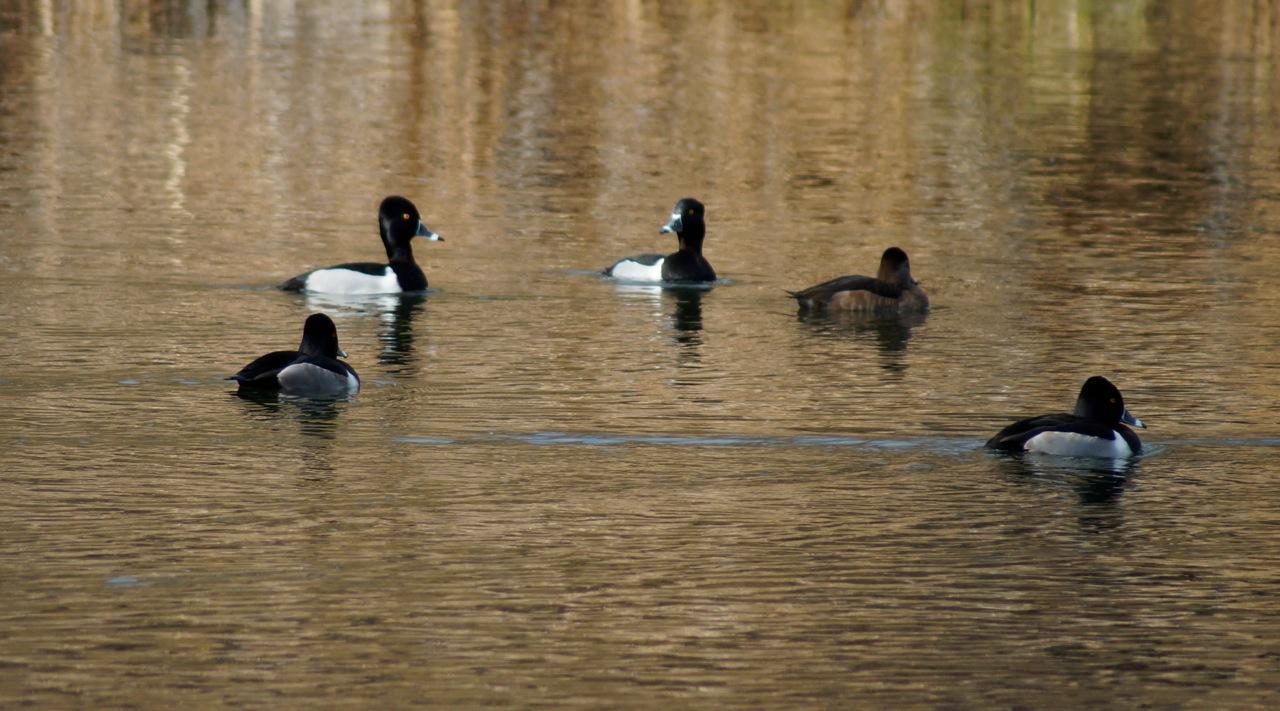 Photo of Coots from furthur away
The ring-necks are shallow divers, feeding on both animal and vegetation food. They are related to scaups, redheads and canvasbacks. Being a ‘Harvest Species,’ meaning they can be legally hunted by permit, they are quite leery of humans. If someone approaches the lake’s edge, the flock will slowly work its way across the lake to the other side. Of course, neither hunting nor shooting is permitted ever in PMC.

Every winter in mid-February, birders throughout the world conduct a bird censuses known as The Great Backyard Bird Count. One-quarter of a million separate counts representing 7,000 species on all continents were tallied last year. Liz Buchroeder records birds at the three PMC golf course ponds. Her counts of ring-necked ducks at Fern’s Lake are among the highest of any count in California. No, we don’t understand the attraction, but we really appreciate their presence. 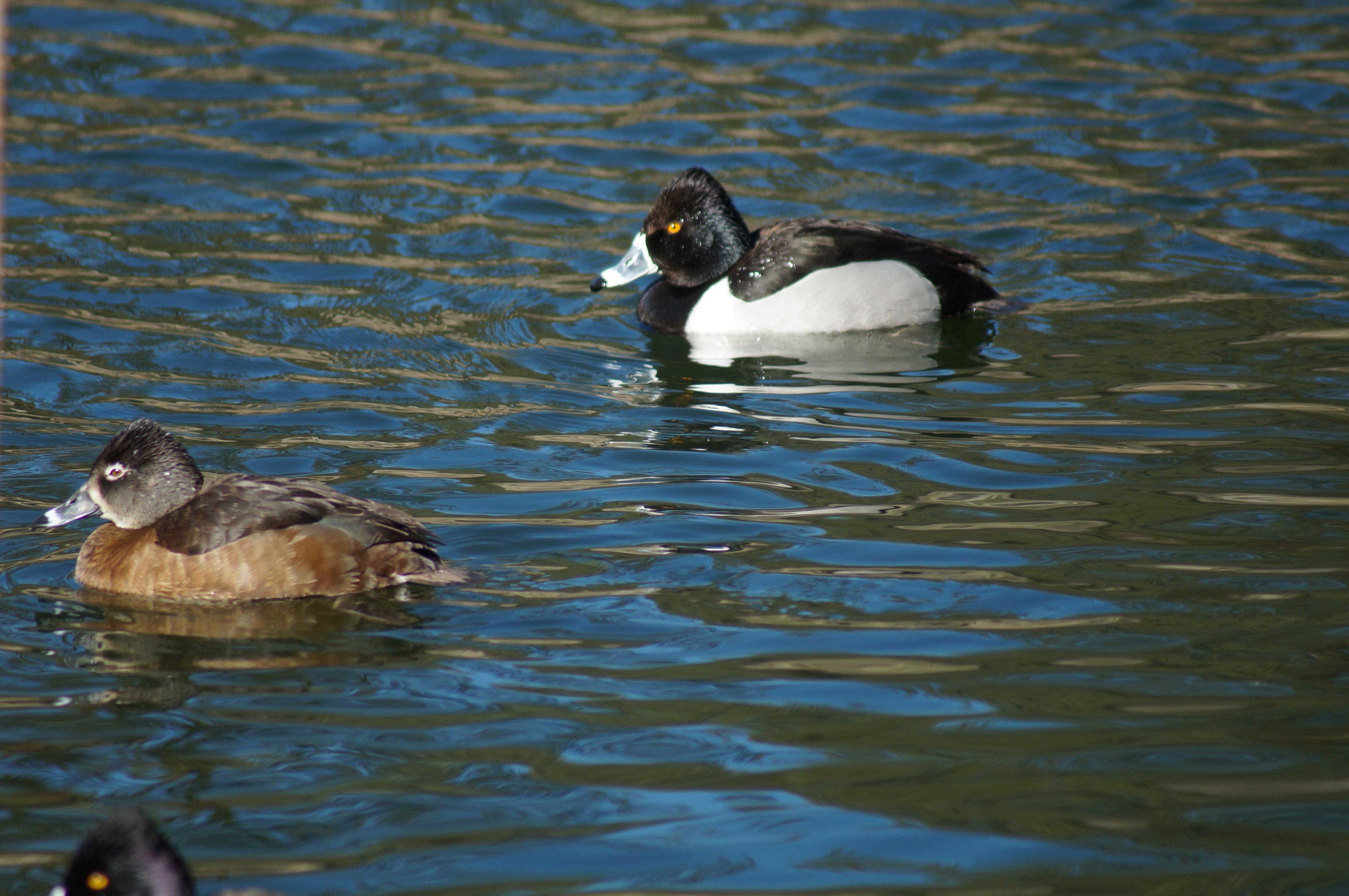 More Coots
The males have a characteristic black-and-white saddleback appearance, while the females are more subdued, but highly attractive. An interesting, and slightly frustrating, tidbit of information involves the name. These birds have a noticeable ring around the bill, so why is their name ring-necked duck? Taxonomists who name newly discovered animals often work with dead specimens in laboratories. It turns out that if one parts the neck feathers, there appears a thin line of cinnamon-colored under-feathers. This feature is highly unusual, and so earned the bird its name. Interesting history, but not helpful for field identification.

Do visit our charming little lake! Whether on a cold, dark winter day with floating ice; a fresh spring morning with the willows popping out in catkins and leaves; during a summer’s evening with swallows working the insects over the water; or on a fall afternoon with bright yellow cottonwood leaves floating through the brisk air – this spot is a treasure for relaxation and renewal.

Range in USE: Entire watershed, except for highest peaks. It has been recorded east of Chula Vista Campground at over 7,800 feet elevation. This may be one of the highest records of elevation in California for this species. 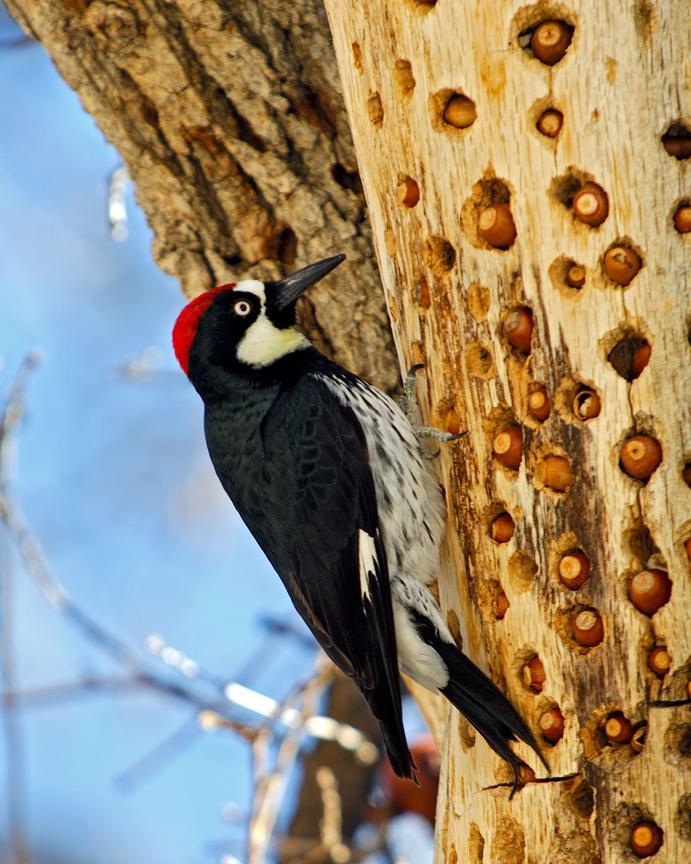 Habitat: Requires oaks. In USE, canyon live oak is probably the species’ principal provider of acorns. Large trees of other species and utility poles are frequently used for granaries and nest holes. Houses are also used, which can be a touchy subject for the human residents.
Identification: Very distinctive in appearance. No other woodpecker has the classic ‘clown’ face pattern. Sexes are similar, but can be identified by a minor difference in head pattern. The female has a smaller amount of red on the head, which is separated from the white above the bill by a narrow band of black.

Feeding: Dependent upon oaks, but can be a frequent visitor to feeders. They love suet. They will tend to dominate all other species at your feeders except squirrels.
Nesting: They are not attracted to nest boxes. They are a very unusual woodpecker in their behavior and lifestyle. They are communal, having groups between two and 16 in number. Large families will have divided work tasks, and may include some younger, non-breeding adults. They establish granaries in tree boles, utility poles and even houses. They build holes in trees and poles for nests, and defend their territory. 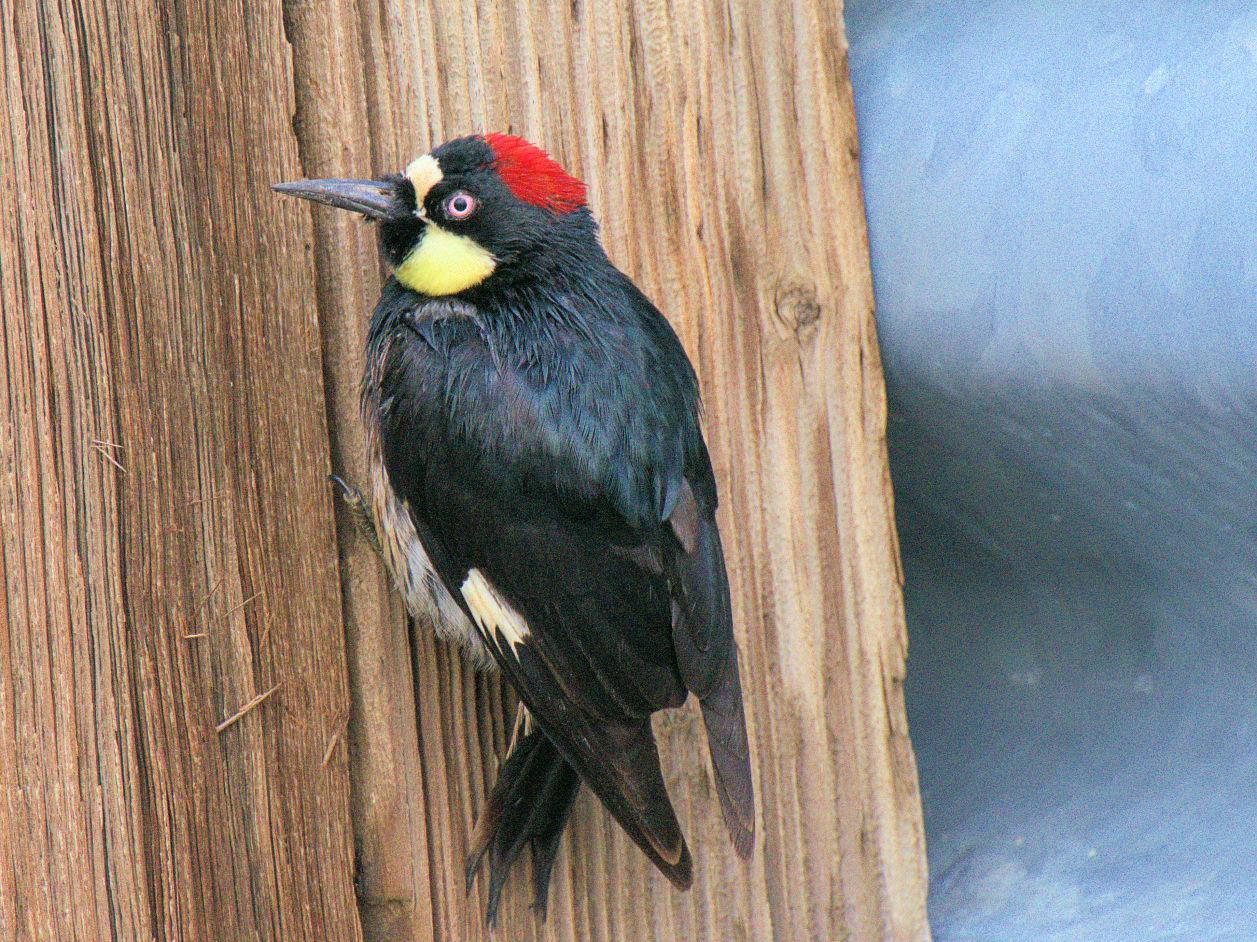 Voice: Their most common sound is a loud raucous laughing. Being highly social, they are very vocal. A noisy and bothersome acorn woodpecker pounding on the wall of a mountain cabin at June Lake in the Sierra Nevada was the inspiration for Walter Lantz’s Woody Woodpecker cartoon character. Lantz’s wife, Grace Stafford, suggested the idea and later became the voice of Woody. The appearance of Woody is more like that of the pileated woodpecker. Woody’s laugh represents much artistic license.

Other notes: This species requires mature oak trees and likes other large trees (and utility poles) as well. They are probably not threatened in USE. They can become a problem for wooden structures. We have used plastic netting to discourage them from using our garage and house as granaries. So far, it has been successful. The netting has to be draped far enough off of the wood to keep them away. This species is probably not a regular propagator of oaks. They are too efficient.